In preparation for a busy 2020 international season, the Cricket Cranes will tour Qatar and India for the next 20 days.

The team will move in two batches with the 1st batch of 14 players leaving on 9th Feb and will spend six days in Qatar before the next batch of players joins them on the India league of the tour.

Deus Muhumuza who had taken some time of the national team is back into the side and will be on both the Qatar and India trips while Saud Islam will also make his debut for the Cricket Cranes.

Saud Islam who has been one of the most prolific batsmen in the league for the past seasons will need to replicate the same form on the international scene if he is to force his way into the main team.

Brian Masaba will captain the side on both legs of the tour and he will be assisted by Arnold Otwani. Davis Turinawe continues in the interim head coach role before a permanent appointment is made.

Youngsters Jonathan Kiiza, Calvin Watuwa, Robinson Obuya, Gerald Mubiru will get their first chance in a cricket cranes jersey on the India leg of the tour and they will be seeking to make an impression on the interim boss in they are get considered as part of the Cricket Cranes in the long term.

Cricket Without Boundaries (CWB) is a UK based charity dedicated to helping, educating and developing local communities around the world through the spread and growth of cricket. The group will be arriving in the country on the 20th of October 2019 and depart on 1st November 2019. Since 2005, CWB has partnered with Uganda Cricket Association in Teacher Coach Training and coaching of students/pupils in several districts in Uganda.

The CWB team will be visiting Masindi, Gulu, and Lira, where they will conduct training of Sports Teachers and coaching of pupils/students. The training will cover a total of 43 schools (30 primary schools and 13 secondary schools). This is CWB’s second visit this year (autumn project) with another visit to follow early next year (spring project) and emphasis will be on improving the coaching skills of the teachers, introducing many young boys and girls to the sport, supporting some schools with basic equipment, and relaying HIV/AIDS awareness messages.

Continuing the great work already accomplished in Uganda is hugely important to CWB and Uganda Cricket Association. The CWB goals are simply - being able to pass on to as many pupils/students as they can the opportunity to learn about and enjoy the amazing game of cricket, to introduce the game to so many who would not otherwise get the chance and lastly, to wrap that all up with a reinforcement and enhancement of the ever-more critical awareness of HIV/AIDS.

The CWB team comprises of the following:

Cricket Uganda gave 17 secondary schools and 13 ladies’ clubs cricket equipment to help them in the development of the game. The equipment is part of the consignment of equipment received by Cricket Uganda from its Australian partners Bankstown District Cricket Club.

Bankstown have been collecting cricket gear from the Bankstown community in Australia since 2004 and sending it to Uganda to help them with their programs. This relationship between Bankstown and Cricket Uganda started at the U19 World Cup in 2004 when the team manager of the Australian U19 team Brian Freedman was touched when he saw a very talented Uganda team share equipment. Since then he has taken it upon himself to collect the equipment on a yearly basis, load it in a container with all shipping costs paid up to Mombasa. 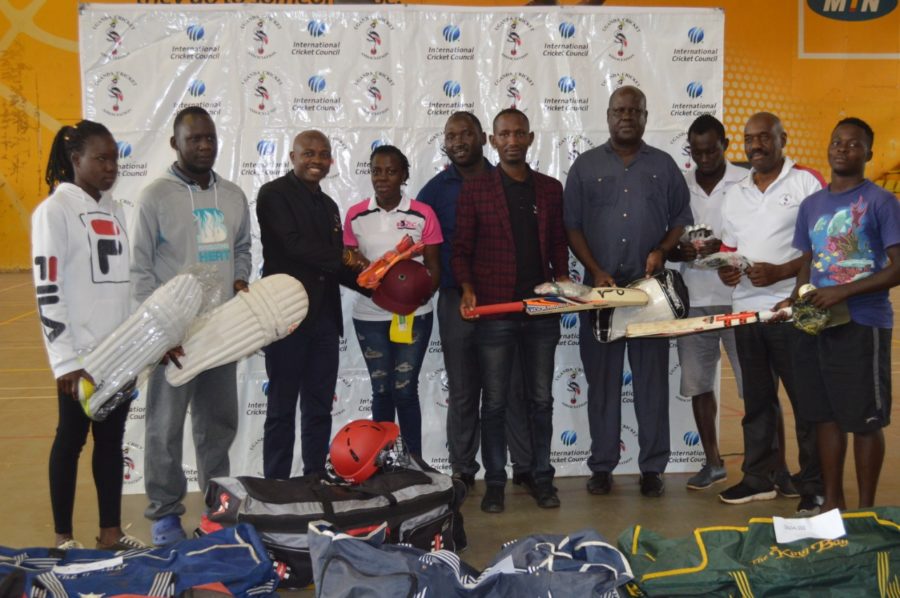 13 ladies’ cricket clubs also received equipment from Cricket Uganda. The 13 clubs make up the ladies’ league and are separated into two divisions. There are six teams in the top division that received equipment include Pioneer, Olila High School, Soroti Challengers, KICC, Jinja SSS and Aziz Damani.

The equipment will surely help the clubs and schools develop their own players as well as ensure they can practise in a safe environment.

Event Winners are as follows;

The annual mini cricket festival came to a close today at the Lugogo Cricket Stadium, the festival that brings together the different regional winners had 14 schools competing for honors in the U11 and U13 categories for boys and girls.

Unfortunately St Agnes Primary School the central region representatives suffered a freak accident and couldn't make if for the finals. Barring that mishap over 100 pupils both boys and girls spent the whole day hitting and chasing balls for bragging rights.

Kyanjuki Primary school who have dominated all categories for the last years were dethroned in the U11 girls that was won by St Edwards from Masindi and the U11 boys that was won by Balawoli Primary School from Kamuli.  None the less Kanjuki managed to snap up the U13 girls and boys titles a reward for their handwork over the years.

The annual mini cricket season is open to only primary school going pupils and runs over two months in over 50 districts in Uganda, the schools first compete at the district level with the winners moving on to the regional competition and the regional winners qualifying for the finals that happen in Kampala.

For primary schools who come from as far as Soroti, Kasese and Masindi sometimes a trip to Kampala is a dream trip and the smiles on their faces tell the story. The mini cricket has been the feeder for the schools development program where children are introduced to hard ball cricket.

National team players such as Charles Waiswa, Arthur Kobe, Davis Karashani are all products of the mini cricket program.

Kutchi Tigers stretched their unbeaten run to 15 games when they easily saw off both Nile and Charity at Lugogo Cricket Oval.

Alepsh Hirani and his charges have been on a roll since the second round of the league which helped them finish a season high 3rd in the league and they hope this good form can take them all the way.

Nile is having a terrible season, dropping down from Division I to Division II and have failed to win a single game in the Group B of the T20 league. It’s no surprise they were all out for 39 with Kutchi chasing down this total in 3.2 overs.

Charity was put to the sword in the afternoon after they failed to chase 160 set by Kutchi Tigers falling short by 67 runs.

The wins keep Kutchi tigers at summit of Group B and are likely to finish as the top team which might give them an easier quarterfinal opponent from a tough Group A.

Kutchi is The loss for Charity did not dent their quarterfinal chances. They should be able to at least finish among the top 4 teams in Group A. If they finish 4th, they will meet the top team from a dangerous Group B who is likely to be defending champions Challengers or league champions Damani.

Team mentor Innocent Ndawula says there no shortcuts to success so they are ready for a tough quarterfinal.

We know we shall finish 4th and then meet either Damani or Challengers. We fancy Challengers so that we get the opportunity to knock out the defending the champions early enough. There are no short cuts for us going forward.

Man of match: Nanji Pindoriya 82(42), 2/11 in 4 oversone of the 4 unbeaten teams in the T20 league thus far they are in an exclusive league with Damani, Challengers and KICC.

Kenyan legend Steve Tikolo described Uganda as his second home and Lugogo as its backyard on his second coming as Cricket Cranes coach.Tikolo was in Uganda, Lugogo in particular, for 10 months in 2012/13 as an assistant/batting coach during a fairytale reign that saw Uganda win the T20 African Premier League (APL) in 2012 and also seamlessly sailed through to the World Cricket League (WCL) Division II after dominating proceedings in Bermuda 2013.

The 44-year-old also has fond memories of Lugogo having stroked a superb ton of 149 at the home of cricket in Uganda as Kenya (32 points) batted Uganda (15 points) out of the Intercontinental Cup in 2005 and he meant every bit of the phrase about Lugogo and Uganda. “I am not a stranger in Uganda,” Tikolo spotting a straight face told journalists at a function held to unveil a galaxy of coaches appointed by Uganda Cricket Association (UCA) to spearhead the ambitious Project 2016/17.“I have been here several times. This is my second home and I will be comfortable. I am excited and anxious in a positive way.”

Challenge aheadTikolo also spoke about the challenge ahead. “Our immediate target is to qualify back to Division II. The training is open to all players who believe they have what it takes to play for Uganda. I will also monitor the league and see whoever is performing. Then in July, I will name a provisional squad of 30, he said.“I am determined to achieve the targets before me and I believe the boys have it in them to bounce back. I am a man of few words and my work will speak for itself.”Michael Ndiko will serve as Tikolo’s assistant on a one-year renewable contract whereas UCA development manager Henry Okecho takes over the mantle as both U-23 and U-19 national men’s teams head coach. His assistants are Emmanuel Isaneez and Jackson Ogwang.

“The two teams at my disposal are very significant to the future of the game in Uganda. They bring together players that are closely aged and both teams will offer platforms for the players to express themselves before playing for the national team. The U-23s will sort of be like our Uganda A side.”John Tumusiime and Emmanuel Kamya are in charge of the national U-15 side whereas celebrated Habibu Mugalula is the new tutor of the National U-19 girls’ team in what promises to be both an exciting and crucial period for the game in Uganda.